The unique capabilities and expertise of Antonius also influences the work of our engineers. Customers appreciate the consistency of having one contact person during the project but it also benefits its end-result. In this article we talk about the engineer’s role during tooling development, prototyping and series production. We close with a challenge by one of our engineers, one that might greatly benefit your next project.

In an earlier article, Antonius engineer and projectmanager Haico van der Goot talked about the engineering process from pitch to product development that resulted in the final drawing needed for prototype development. Looking at the entire scope of such a project he says:

“It’s fantastic to see such a product, that I’ve been responsible for from the start, being installed and working as intended. I know that they are operational at floating production systems off the coast of for example Brazil and will be for years to come. At the same time, I cannot wait to deploy everything I have learned in the next project.”

Now, he will discuss the role of the engineering in the rest of the process, including:

“Our capabilities and expertise are unique, especially when you consider the huge scale at which we work,” says Haico. “Antonius can handle large metal parts with a size up to 10 meters and has a wide variety of production techniques in house that allow us to make any shape imaginable. Being a specialist also means that we engineer and manufacture most of the necessary tooling ourselves. We know better than anyone which tooling we will need both during prototype development and series production. Having the correct tooling ensures consistent, high-quality reproducibility.” 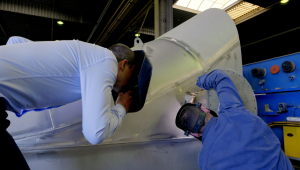 During prototype development, the product is moving through different phases, but it is often not a linear process. Whenever the team encounters a deviation from the expected result, for example in terms of stiffness or geometry, it is discussed both internally and with the customer. This iterative process ensures the manufacturability, in larger quantities, of the product and culminates in a first-article inspection:

“The final prototype is submitted to what’s called a first-article inspection. It is a formal review and reporting process during which each part, and the product as a whole, is inspected and measured to ensure everything is compliant to specification. It allows us to discuss all the changes and deviations in detail and is used for the final revision of the technical drawings. These will be finalized in preparation for series production.”

Using our experience in tanks for the transition to renewable energy in carbon capture and storage.

During series production, the engineer’s role remains critical. He ensures that all critical tolerances are met and discusses any deviations with the customer to make sure that they are acceptable. Deviations are not always caused by (changes to) the production process:

“Our customers greatly appreciate that the same Antonius engineer remains attached (or…involved) for the duration of the project. They know exactly what to expect and any questions will be answered by the same contact. That stability is rare. During series production, my colleagues and I see to it that we achieve the desired result and anticipate any problem proactively. That includes, for example, material availability. Even if we need to suddenly switch suppliers or raw material, we can quickly adjust in such a way that we will still meet the customer’s specification.”

“What I would do differently or change? Well, I would convince our customer to give us more responsibility in terms of the technical drawings. Most companies now outsource their drawing to, for example, India, but they have a hard time making sure that all changes are implemented, and it simply takes too much time. But most importantly, there is much knowledge lost in translation that I think the project would benefit tremendously if it were retained. The design intent in relation to GD&T (geometric dimensioning and tolerancing) is often overlooked while it’s off great importance to the manufacturability of the design. So, I think we should take responsibility (or at least be part of the drawing review process) for that aspect as well. The whole process would be more efficient.”

Would you like to know more about working with Antonius or do you have a question that you would like to discuss? Reach out via Rob Derix on rderix@antonius.nl or +31 (0)475 439 000 and get in touch with one of our engineers.

Send us an e-mail
sales@antonius.nl

Get in touch with us

Do you have any questions?

Please fill in this form: